UPDATE: Good news! The Goodlatte & Ryan bills were defeated. We need to keep up the pressure to end the criminalization of immigrants and keep families together. 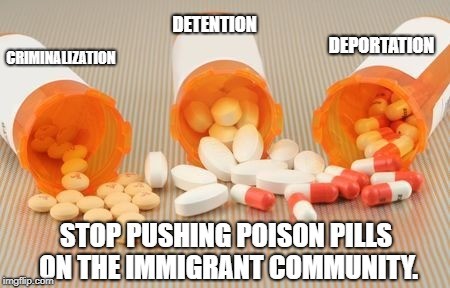 What You Need to Know about the Goodlatte & Ryan Bills

These bills do NOT end family separation and they are NOT solutions for individuals with DACA. Goodlatte’s bill is an anti-immigrant enforcement-only bill that will expand detention and deportation on a massive scale. Ryan’s bill offers false promises to end family separation by only proposing family prison camps as a solution to the current Trump-created crisis.  We cannot let Trump hold the immigrant community hostage to a crisis that he manufactured. It is completely within his power to end his policies of family separation.

These proposals, developed by nativist hardliners like Stephen Miller, are anti-immigrant and would exponentially harshen immigration enforcement – which already tears families and communities apart. Both of these bills promote Trump’s racist immigration policies in four ways:

Under the new enforcement provisions in these bills:

Will These Bills Pass?

Although these proposals were rejected by most Democrats and many Republicans earlier this year in the Senate, members of Congress continue to introduce new versions for passage. But if the House passes a bill that Trump agrees to sign, there will be tremendous pressure on the Senate to act. We need more organizations and people to oppose these bills.

Sample script:
My name is —–, and I live in …… I am calling because I believe that the Ryan and Goodlatte bills are anti-immigrant. These bills will result in communities of color, across the board, targeted for immigration enforcement, subject more individuals to mandatory detention and others to indefinite detention and further criminalize immigrants – who are essential to our country’s neighborhoods, schools,  communities, workplaces and society.

I oppose HR 4760 and the Ryan immigration bill. I urge you to vote against these bills.

The Immigrant Justice Network (IJN) is a collaborative formed in 2006 between the Immigrant Defense Project (IDP), the Immigrant Legal Resource Center (ILRC), and the National Immigration Project(NIP/NLG) to work towards the elimination of unjust penalties for immigrants entangled in the criminal justice system and to end the criminalization of immigrant communities.

The Immigrant Justice Network is working to ensure that federal immigration reform includes policies that are fair and just.